100% of Profits Will Be Donated Through Oct.

Unicorns, Rainbows and Science, from the series Full STEAM Ahead by Terri Fry Kasuba, can be purchased as everything from fine art to iPhone skins. Profits support Pretty Brainy through Jan. 1, 2015.

In the acronym jungle of STEM and STEAM, the letter A is for Art, and artists Kate Lindeen and Terri Fry Kasuba have teamed up to make two giant points. One, science, technology, engineering, and math are inseparable from art. There is no STEM without STEAM. And two, more girls — a lot more girls — need to be engaged in STEAM.

So Lindeen launched #ChangeThePattern, an initiative that highlights the need to change the pattern of too few girls and women studying and entering STEAM careers. Grounded in her public blog, [Re]Designing Women, and Kasuba’s fine art series, Full STEAM Ahead, the movement promotes understanding of STEAM and the diverse thinking and problem-solving that females bring to each discipline.

Works in the series are available as fine art prints and stretched canvases, as well as on greeting cards and cases and skins for phones, tablets, eReaders, laptops, and more. The full product line may be purchased at www.Nuvango.com.

One STEAM discipline per month will be highlighted. “S Is for Science” kicked off the initiative Oct. 24. Works by Kasuba now in the collection are inspired by — and inspire engagement in — science. The works, Cosmic Voyage, Science Experiment, and Unicorns, Rainbows and Science, take on “the idea that to be equal does not mean to be the same,” Lindeen writes. “Topics or objects that are typically considered ‘girly’ are no less worthy of our attention and can, in fact, be an effective way to inspire and attract our future scientists.”

Artist Statement: “Don’t Underestimate the Complexity of Something Because It’s Beautiful”

Kasuba says of Unicorns, Rainbows and Science, “I chose to show rainbows, flowers and unicorns because these are images that are typically seen as ‘girly’ — Breaking them down to show substance.”

She continues, “Don’t underestimate the complexity of something because it’s beautiful. I’ve incorporated unicorns into this piece to symbolize the essential role imagination plays in scientific discovery and innovation.”

Unicorns, Rainbows and Science: Get Your Downloads

Unicorns, Rainbows and Science also is available as desktop patterns and wallpapers, including for social media. Downloads are available at [Re]Designing Women.

Lindeen, who is a creative director at eBay, says, “I started this #ChangeThePattern series because I was inspired by [Heidi Olinger’s] TED talk in particular and wanted to do something to make a difference.” [Re]Designing Women began as part of an initiative in Design Thinking led by John Maeda, former president of the Rhode Island School of Design (RISD). As a contribution to the design community, the blog highlights creative women and promotes female leadership. The goal? Make a positive difference in the lives of girls and women.

Browse the Full STEAM Ahead collection at Nuvango.com/fullsteamahead.

Contributing to the national STEM to STEAM Initiative is among Pretty Brainy’s priority issues. We are grateful to Kate Lindeen and Terri Fry Kasuba for promoting STEAM and generously supporting Pretty Brainy. 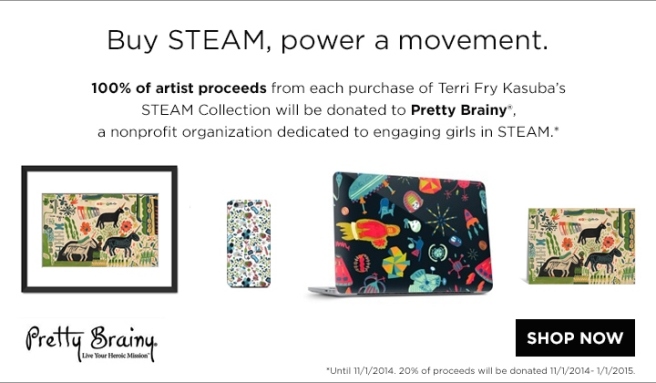 We are a 501(c)(3) nonprofit organization that empowers girls to gain STEAM.