Pretty Brainy is a 501(c)(3) nonprofit organization. Join our email list and receive news on girl empowerment through STEAM learning.

Girls in STEM and STEAM 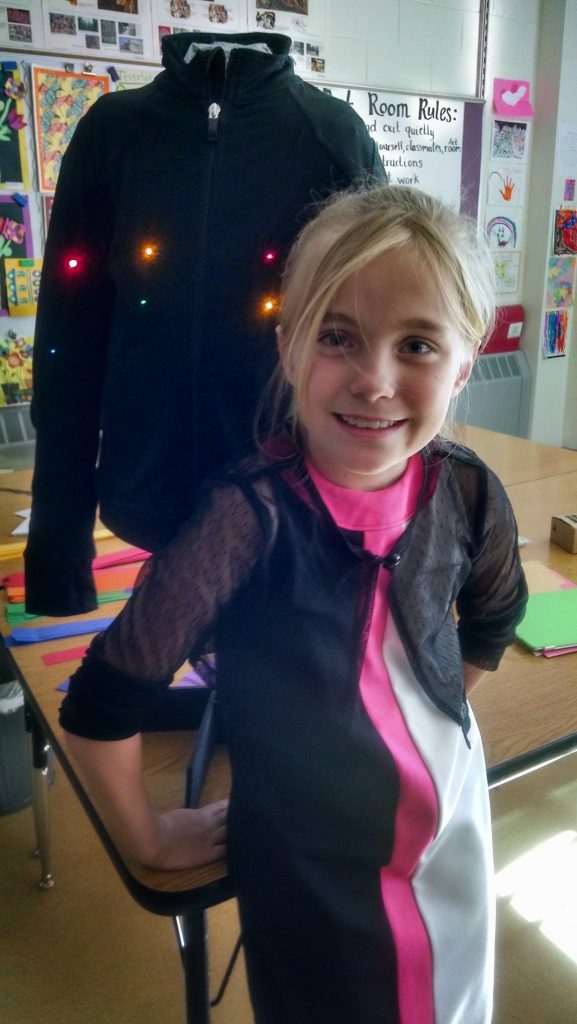 Kata, grade 4, with the LED jacket she designed to increase a runner’s visibility at night. STEAM workshop: Textiles + TechStyles. 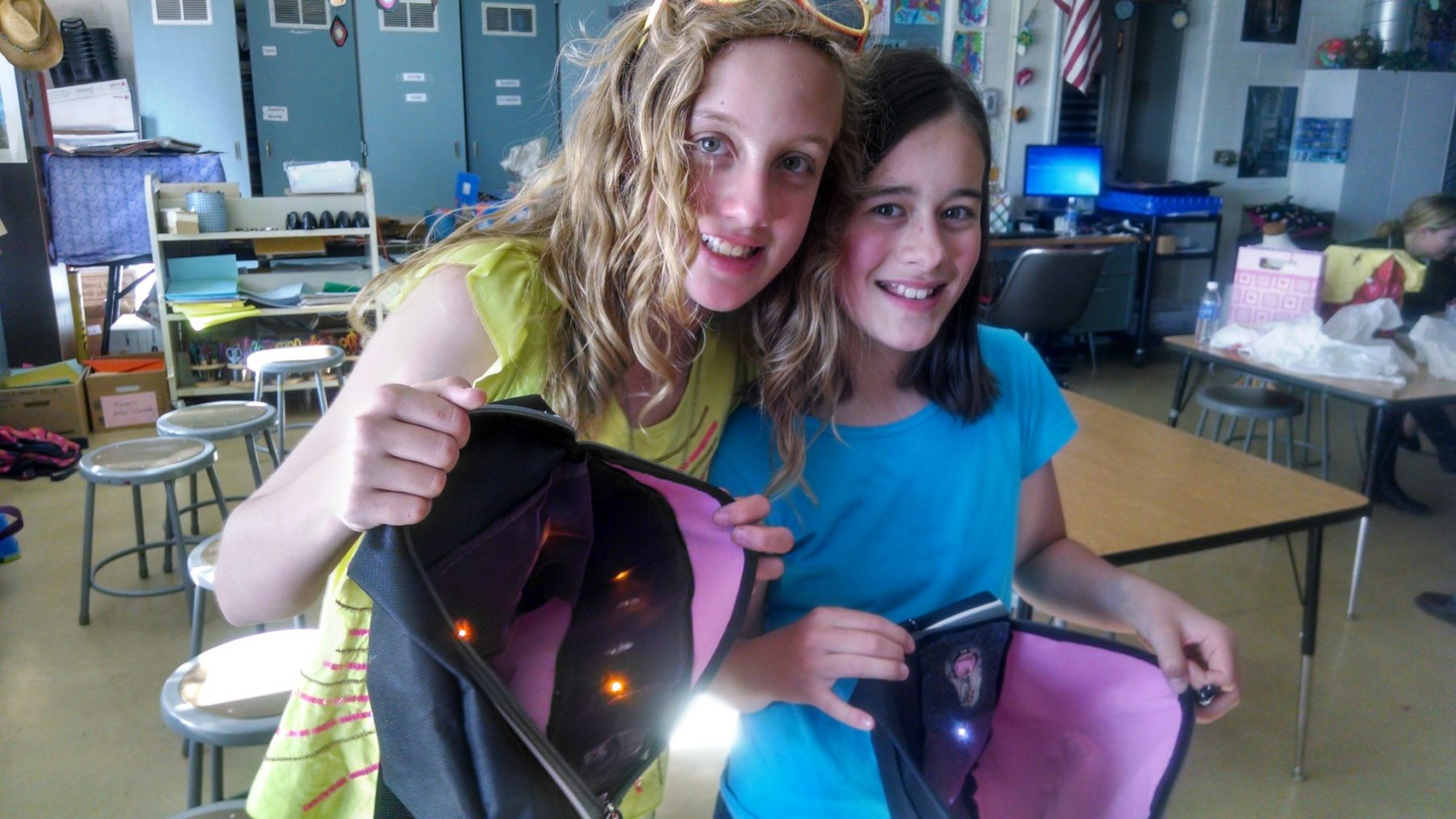 In learning about circuitry, the science of electricity, and customer-centric design, Lacy (l) and Madeleine, grades 4 and 5, created an interior-lit backpack. The STEAM workshop in which they participated, Textiles + TechStyles, was made possible with funding from the OtterCares Foundation. 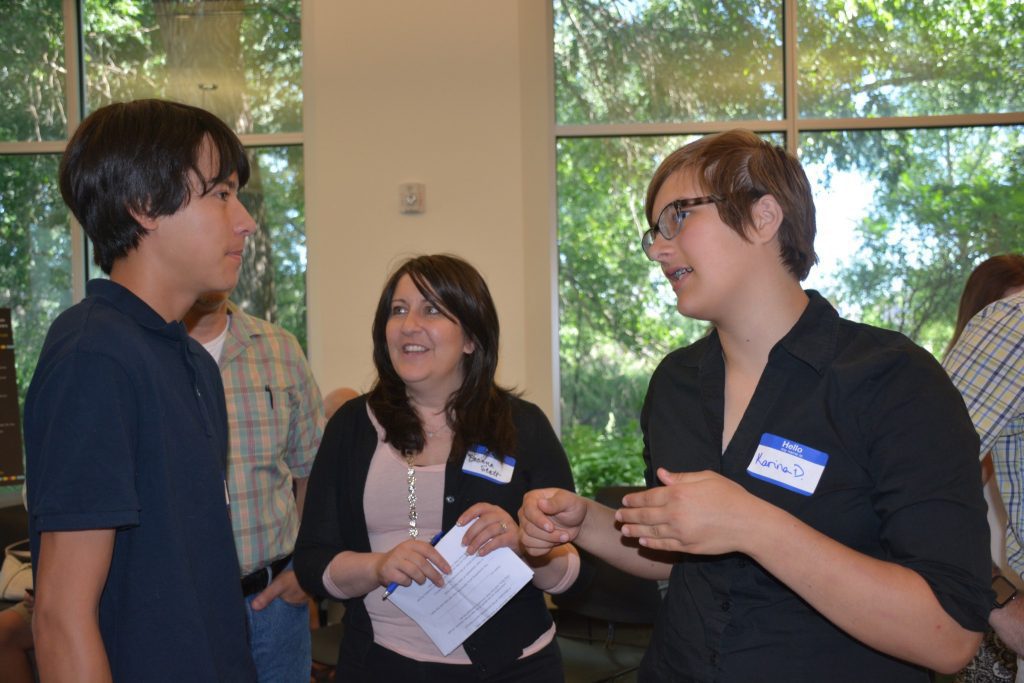 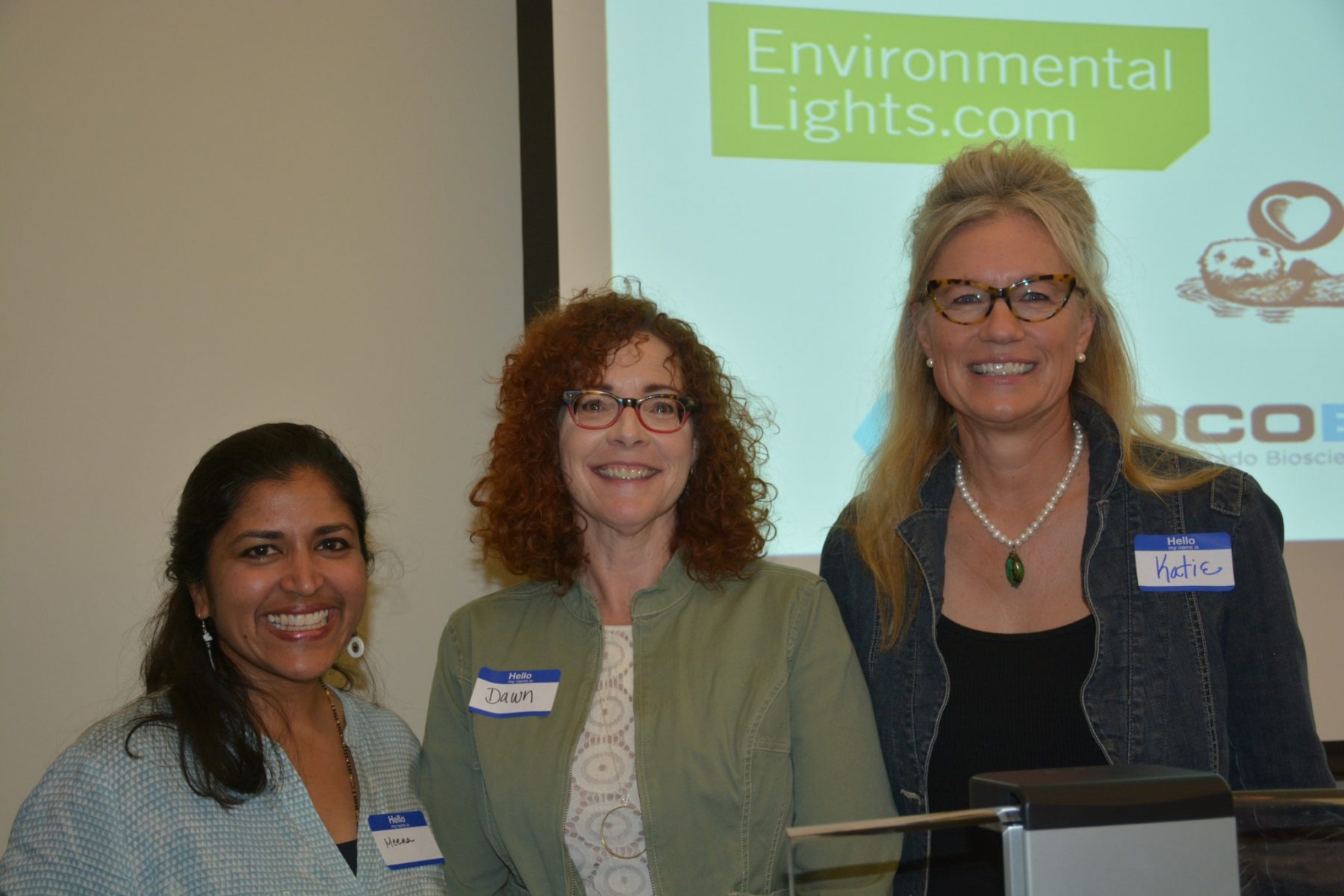 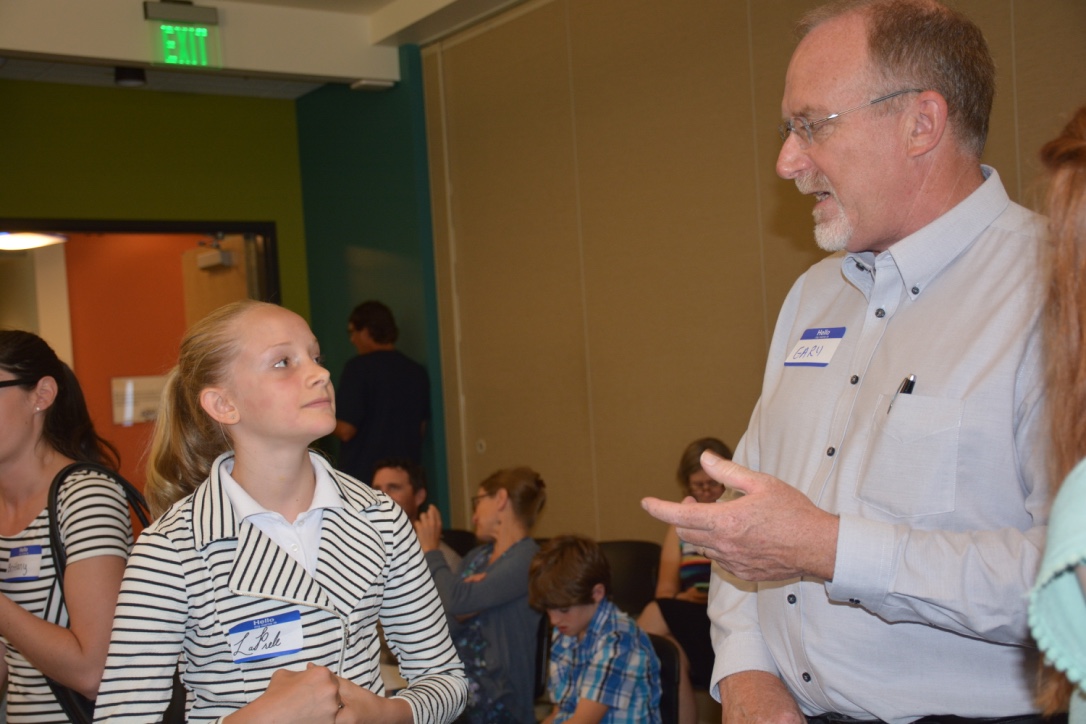 Laprele Zeller, grade 6, fields questions about her design from OtterCares Executive Director Gary Rogers. After conducting interviews at a local shelter, Laprele created an emergency alert backpack for the homeless. The 11-year-old was a participant in Textiles + TechStyles2, a Pretty Brainy workshop in which middle and high schoolers learn design thinking and how to code in the Arduino programming environment. photo: Shanthini Ode 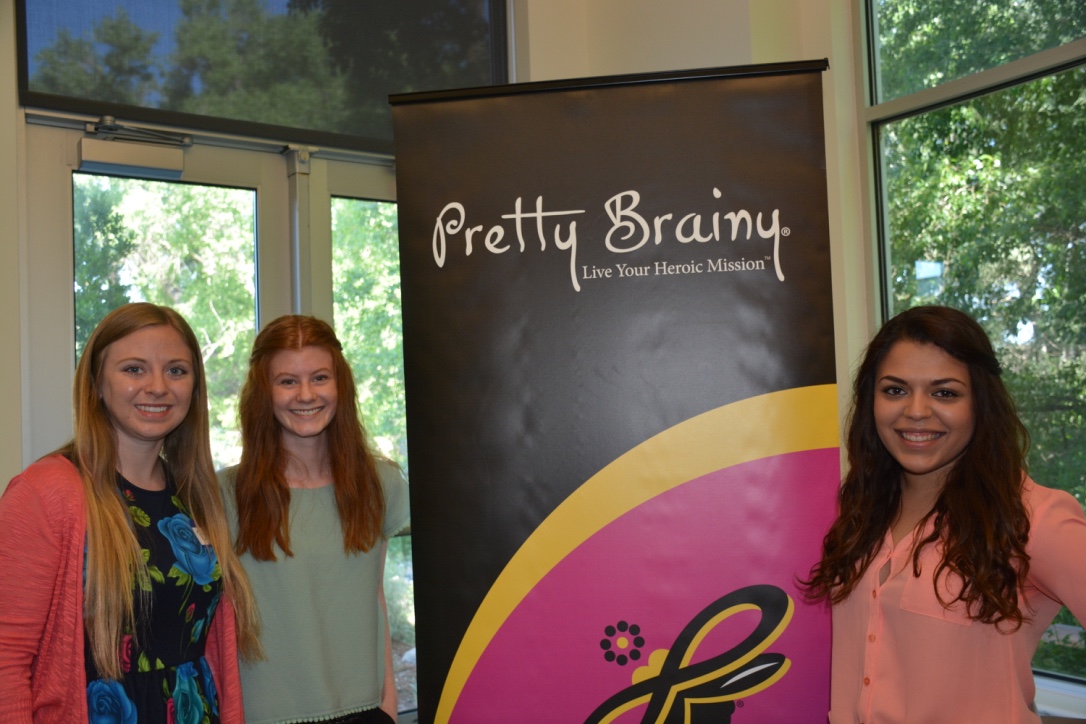 This inside view of a Pretty Brainy workshop in Fort Collins, CO, documents the organization’s style of project-based learning and mentoring, including telementoring with engineers at Environmental Lights, based in San Diego.

Pretty Brainy honored six middle and high school girls and two mentors for their accomplishments in service learning and STEAM. The event, held June 14, 2015, at the historic Edwards House in Fort Collins, CO, was underwritten by Nancy Richardson. Richardson is founder of the OtterCares Foundation and co-founder, with her husband, Curt Richardson, of Blue Ocean Enterprises. 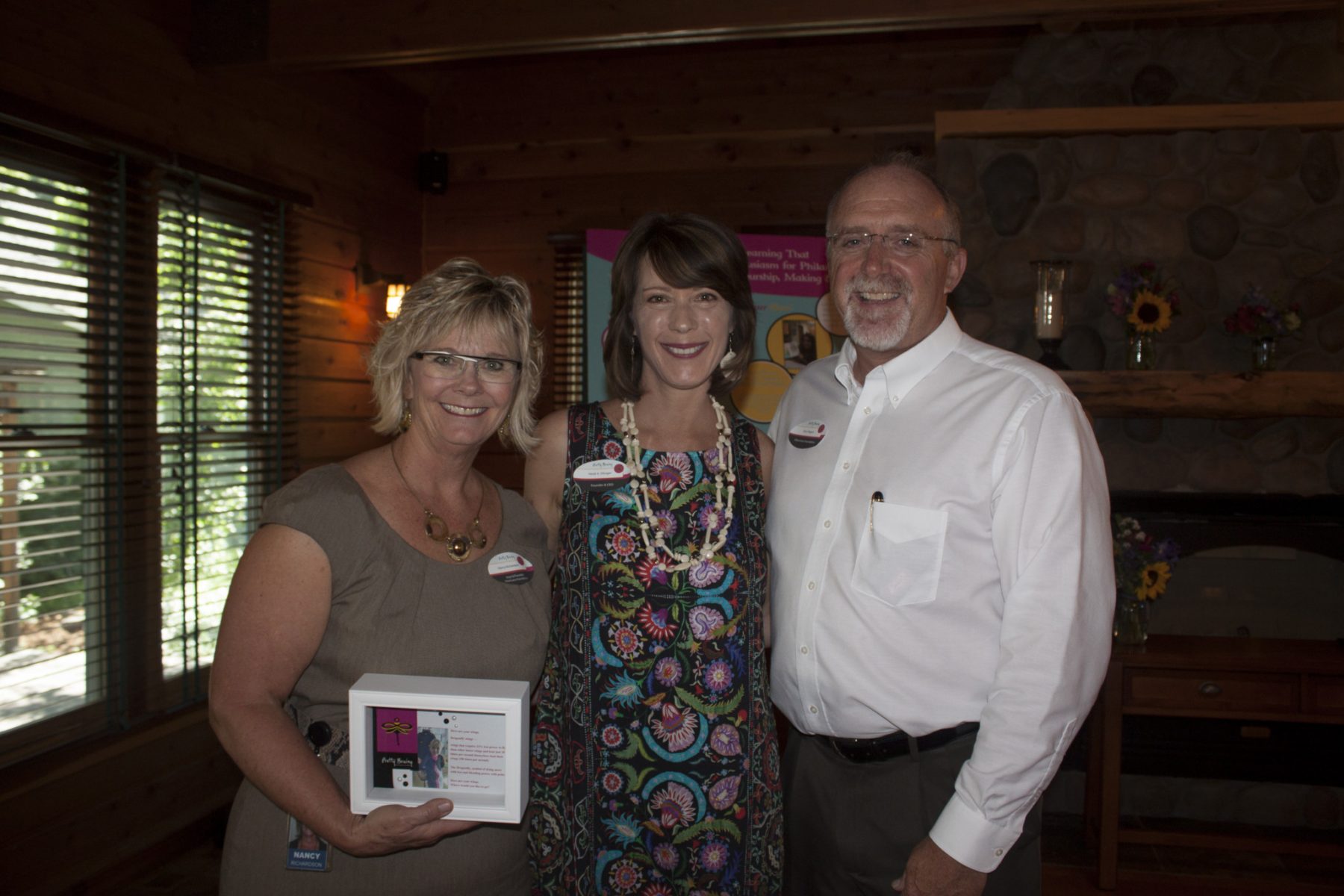 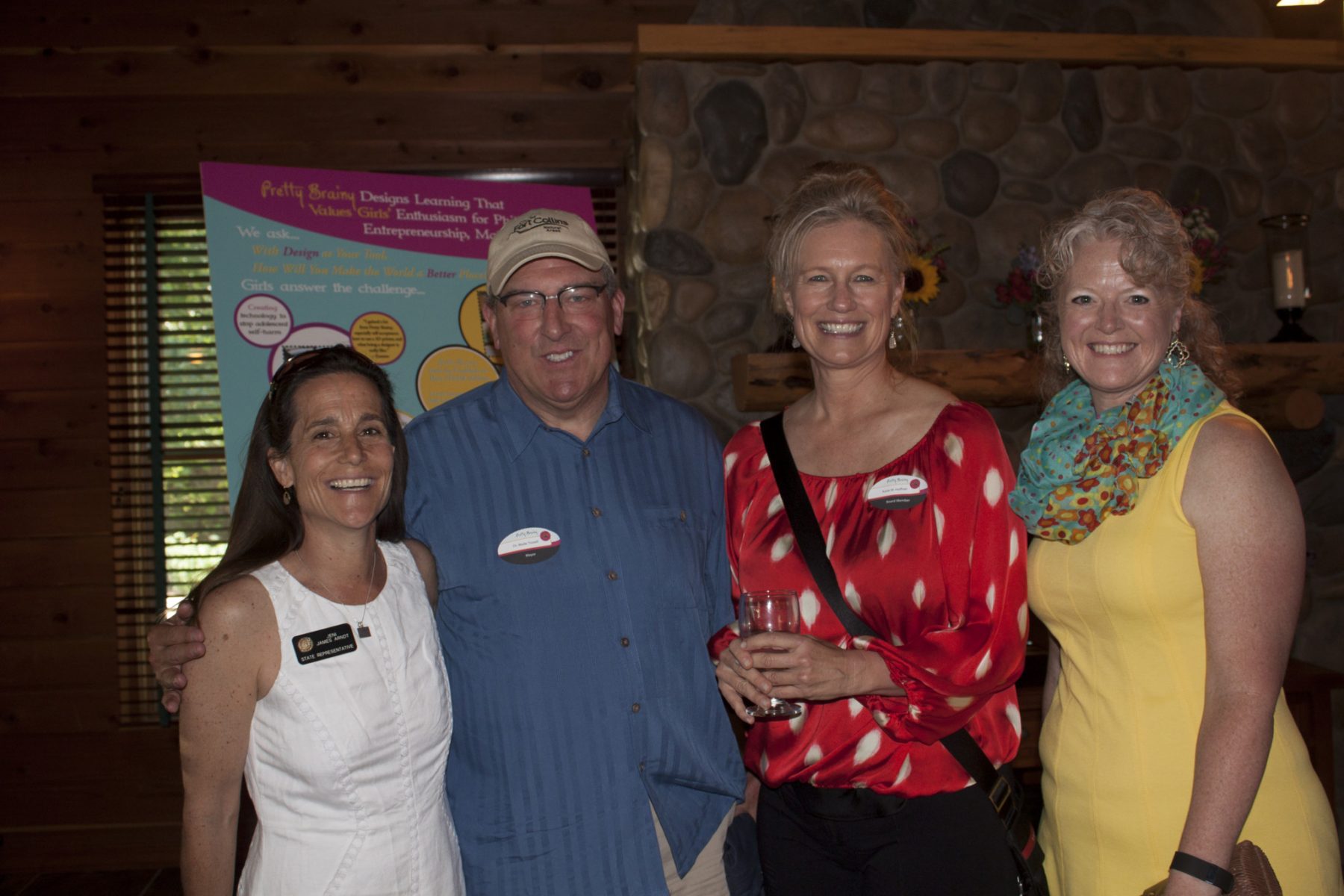 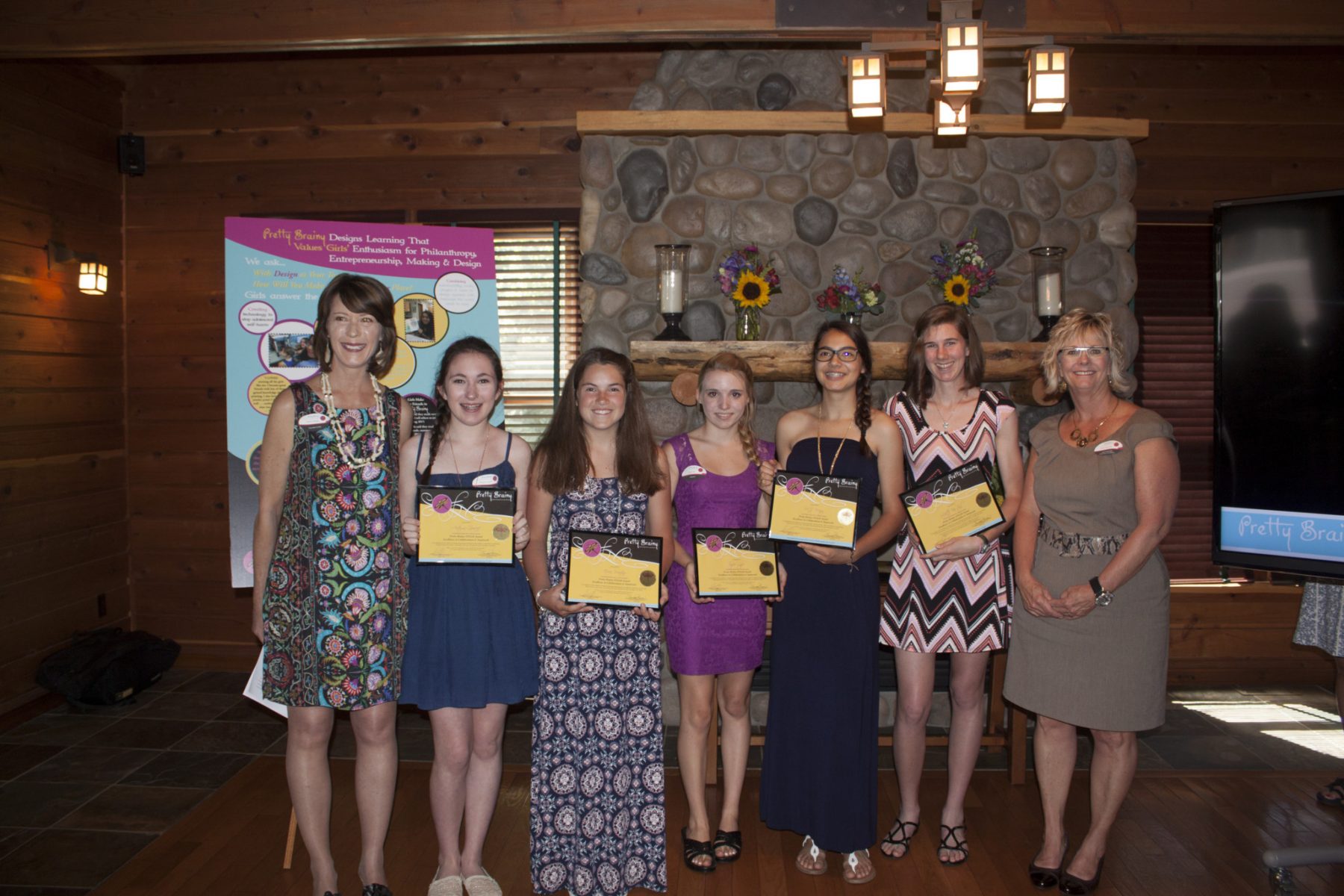 The International Society for Technology in Education 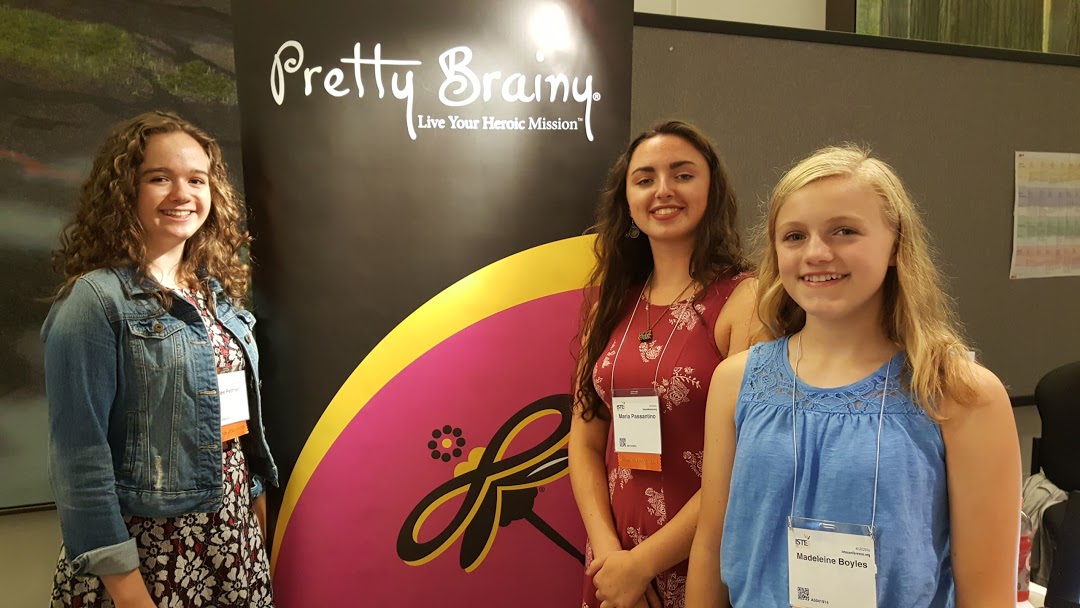 Bee Pettner, 14, Maria Passantino, 17, and Madeleine Boyles, 13, represented Pretty Brainy at the 2016 conference of the International Society for Technology in Education (#ISTE2016). 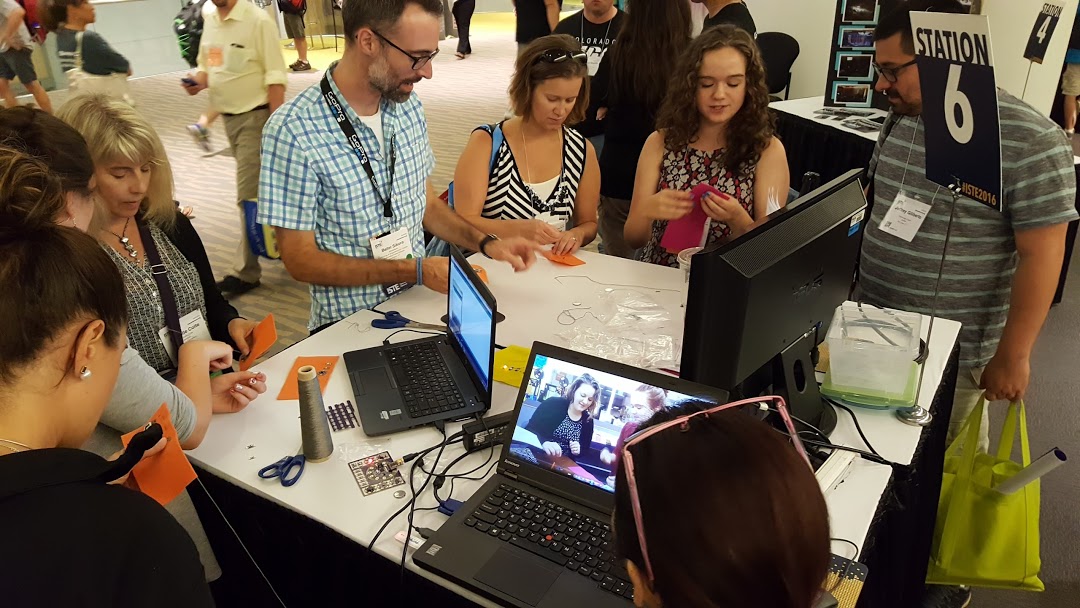 The girls, who joined Pretty Brainy CEO Heidi Olinger at the conference, taught teachers from around the globe how to build circuits with eTextiles. 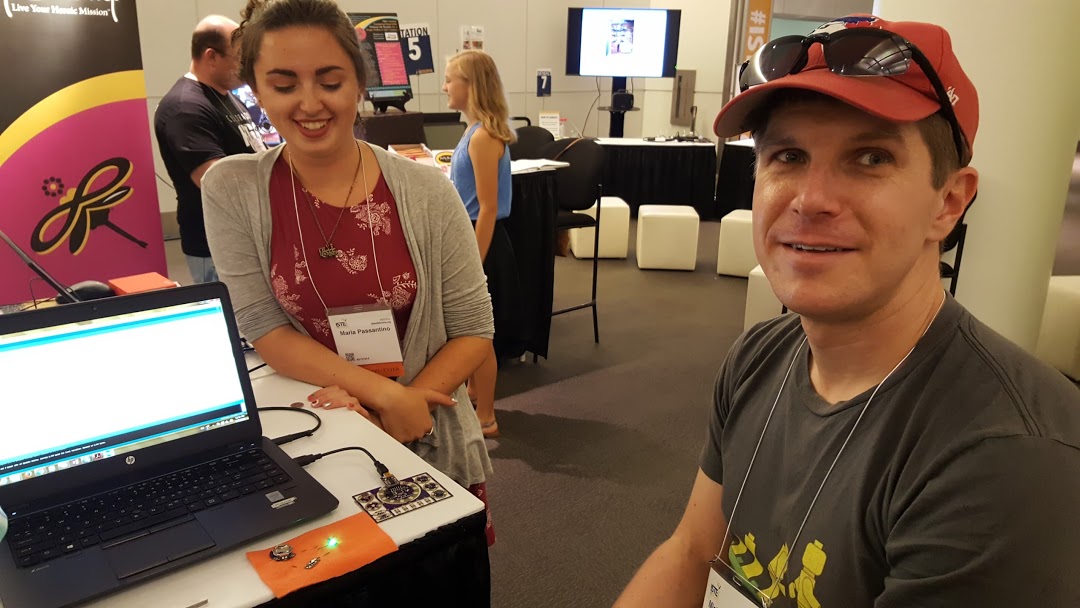 Maria looks at the work of her student, Michael Davidson, a teacher from New Zealand. Davidson tweeted about his success in creating his first-ever circuit, “My light went on!” Librarian Michelle Colte posted, “Sewed a circuit and met amazing organization @prettybrainy. Must bring to Hawaii.” 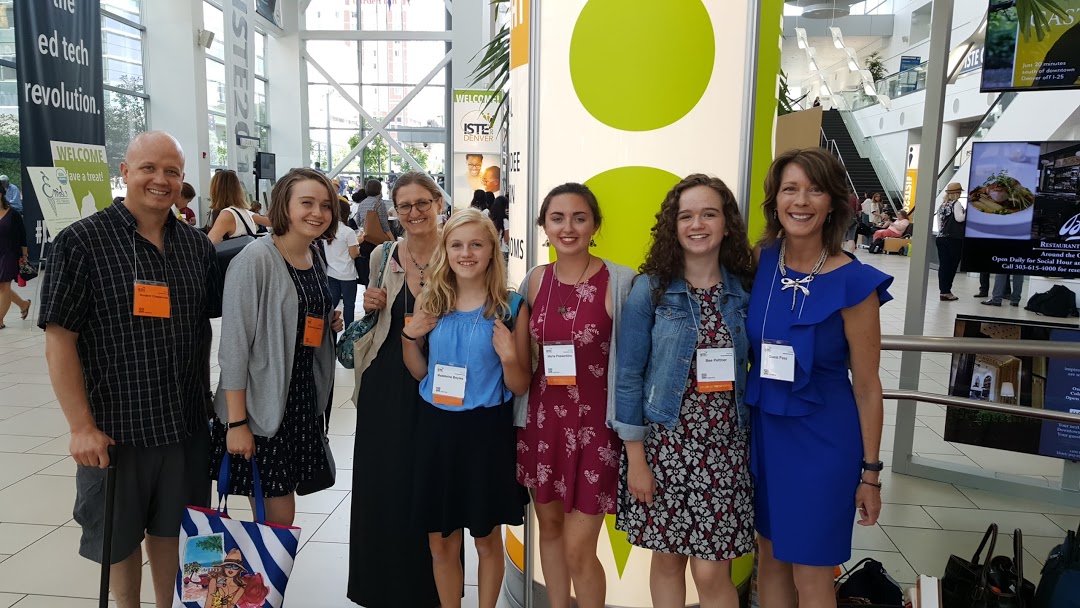 Pretty Brainy’s chaperones for the conference, which was attended by a reported 16,000 educators worldwide, were (from left) David Pettner, Audre Pettner and Claire Boyles, who gathered for a photo opp with Madeleine, Maria, Bee, and Heidi Olinger.

Pack2School with the OtterCares Foundation 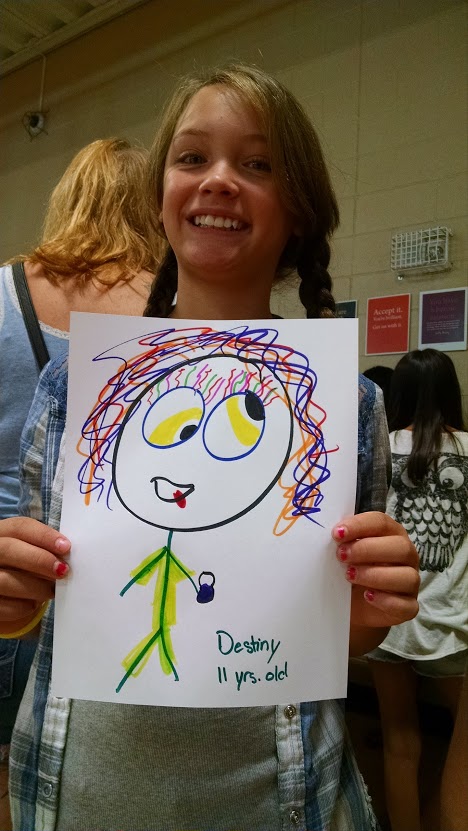 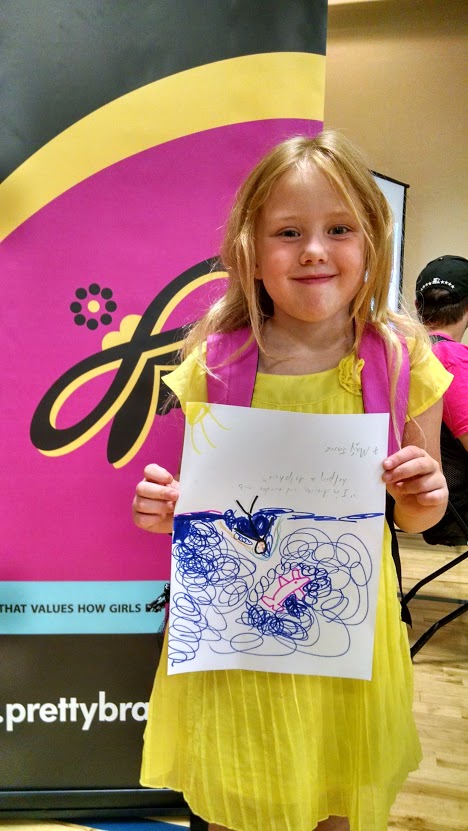 Pretty Brainy reprised a version of Margaret Mead’s 1957 landmark activity, “Draw a Scientist,” with hundreds of K-12 students. The drawings represent a scope of how girls see themselves in STEM and their perceptions of science in general. Most students, including Destiny (left) draw a mad scientist. But MaryJane, who is 7, drew herself as a scientist diving into the ocean to save a dolphin.

Each year in August, the OtterCares Foundation provides new backpacks and school supplies, at no cost, for students in need in Colorado’s Poudre School district. While waiting in line for supplies, students learn and create with Pretty Brainy and other organizations.

Give where needed most

Our Wonderful Donors Include the Following