Girl Report: How to Close the STEM Gender Gap

Girl Report: How to Close the STEM Gender Gap

Editor’s Note: In fall 2018, Pretty Brainy’s service learning project, MISSion Innovation, gave Rylie Mann the opportunity to ask girls and women about their self-concept when it comes to mathematics. Their answers and additional conversations with MISSion Innovation participants about the STEM gender gap provided substance for her honors thesis at Colorado State University. Here she summarizes her research.

Female voices are often hard to come by in the physical sciences. Women perform equally to men on competitive exams and classroom assessments, hold over half of bachelor’s degrees, participate equally in the overall workforce, and have made headway in other formerly male-dominated fields, including healthcare and the law (Hill, Corbett, & Rose 2010). Yet, they continue to participate in these fields at significantly lower rates than their male peers.

The gender gap represents substantial untapped potential, which has the power to increase the innovative capacity and size of economically crucial fields, including engineering and technology (Beede, Langdon, Mckittrick, Khan, & Doms, 2011).

This is one of the BEST photos from #MISSionInnovation2018. Our competition winners, the designers of ThermaFox, were missing a team member when announcements were made. They made sure to let her know that they missed her during the celebration! It was so sweet, and so appropriate. This is what we’re here for. Women supporting women. Making space for everyone on our team, and bringing them to the spotlight when the team goal is met. I love you ladies! You are so inspiring!

Theories as to why women’s underrepresentation persists range from higher priority placed on familial responsibilities to stereotypes of the fields themselves. Almost all theories, however, can be placed in one of two categories: one, environmental influences, and two, personal characteristics (Sax, Lehman, Jacobs, Kanny, Lim, Monje-Paulson & Zimmerman, 2016). Both of these help to translate into one’s self-concept.

The term self-concept stems from academic motivation research and refers to an individual’s perception of their own abilities. The measurement of self-concept is often used as a predictor of motivation and enjoyment of varying subjects (Diekman, Brown, Johnston, & Clark, 2010).

Compared to their male peers, female students typically have a lower math self-concept — or how good they believe they are at math (Hill et al., 2010). I attempted to find the relation of this self-assessor with student intentions to pursue careers within the physical sciences, as well as generate more insight into why a subset of women chooses to remain in these disciplines. The study took place at the 24-hour launch of MISSion Innovation, and a total of 28 students participated. They ranged in age from 13 to 27 years old.

“When you leave a beautiful place, you take it with you wherever you go.” -Alexandra Stoddard . . Have a happy and successful Friday, Innovators! Thinking about you guys at #DenStartupWeek.

My work was a mixed methods study, meaning I used both quantitative and qualitative data to answer my research questions. The quantitative section, a survey, was a modified version of the “Attitudes Toward Mathematics Inventory (ATMI),” originally created by Dr. Martha Tapia at the University of Alabama. Tapia developed the ATMI to measure student math self-concept, and the inventory can be further broken down into additional contributing factors: security, value, motivation, and enjoyment. This allows a researcher to better identify what contributors are the most valuable in determining a student’s math self-concept score.

The qualitative portion of my study, the focus group, further explored these topics, including why a subset of the women, who are college undergraduates in STEM disciplines, choose to remain in these disciplines.

My findings confirm that math self-concept is an adequate predictor of a girl’s or woman’s intention to pursue the physical sciences.

My findings also show that enjoyment and security are problem areas for women regarding motivation to pursue STEM fields.

I found positive correlations between the factors of value and motivation, motivation and enjoyment, and enjoyment and security. This means when someone is motivated to complete tasks within mathematics, they are more likely to have found value in and enjoy completing the subject matter. Additionally, it shows that when students feel secure, they are more likely to enjoy the subject matter.

I found negative correlations between factors when comparing value and enjoyment, value and security, and motivation and security. Translation: when someone does not find value in the subject, they are more likely to feel less secure and not enjoy the subject matter, leading to a decrease in motivation to complete tasks in the field.

These correlations show that effective ways to get young women more interested in the physical sciences may be by demonstrating the value of mathematics-based careers and creating support systems or changes in mindset to increase their feelings of confidence (security) in their abilities. Comments from participants during the focus group reinforce these as actions to support women in the physical sciences.

Many of the students shared insights into their support systems and the need for more mentoring organizations, such as Pretty Brainy. As one participant so aptly stated, “You don’t know you need this [until you experience it].” Female students in the physical sciences often do not have the opportunity to interact purely with other women with the same goals and interests, and many spoke positively about MISSion Innovation giving them the ability to do so. Participants’ comments included, “It’s just nice to relate sometimes,” “It’s nice to have a group of girls you can hang out with,” and “I like the environment and the people.”

Drive to create lasting change through engineering (and finding value in mathematics careers) was also a common theme. One student’s telling statement was, “I like being able to bring solutions to problems because I think that is such a beautiful thing in engineering.” She continues —

Your structure is you’re not going to bring up a problem unless you [are] going to try to find a solution to it. And that’s so contrary to so many of our social issues, political issues, and day-to-day life, so to be able to be encouraged to answer and do whatever you need to do to get that answer is really nice.

Young women have the passion and intelligence to excel in careers in the physical sciences; they simply need the support and empowerment to start on the path. By providing young women with safe spaces and communities to turn to for support and introducing them to the ways in which they can help others through their knowledge and dedication, they become empowered to become innovators. Going forward, implementing mentorship and networking programs, as well as introducing students to the variety of careers within these fields, should be a top priority in K-12 schooling, as well as universities (Dubow, Quinn, Townsend, Robinson, & Barr, 2016). The underrepresentation of women in the physical sciences will not change unless the research done translates to tangible changes in curriculum, programing, and societal perceptions. 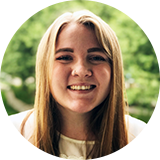 Rylie Mann will graduate from Colorado State University in spring 2019 with a B.S. degree in Biological Sciences focused on Integrative Organismal Biology. After graduation she plans to teach and volunteer abroad before pursuing a master’s degree in education. In 2018 she focused her honors thesis research on MISSion Innovation, a service learning program from Pretty Brainy. Outside of working toward her career goals, she enjoys watching terribly cheesy movies, reading, and going to as many concerts as she can afford on a college budget.